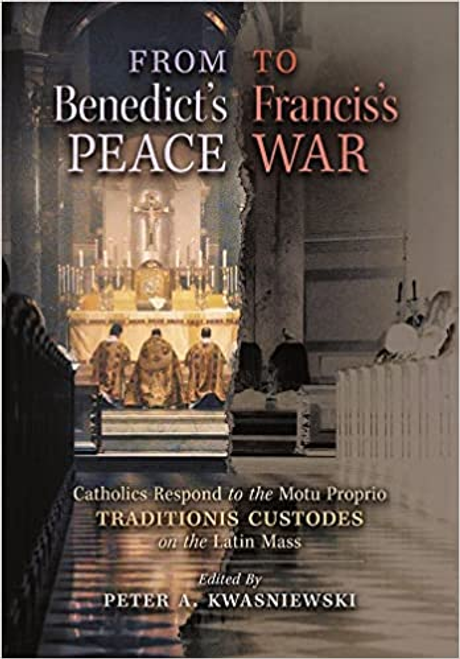 An anthology of essays and articles by prelates and pastors, theologians and canonists, philosophers and cultural figures—including:

Already on July 16, 2021, the reactions to Pope Francis’s severe restrictions on the traditional Latin Mass in Traditionis Custodes were like a river in full flood: articles, essays, interviews, podcasts—everywhere and from every point of view. An emotional, spiritual, intellectual dam had broken and the waters of discourse poured forth across the world. The sheer volume of writing occasioned by Traditionis Custodes is unlike anything seen in the history of papal documents—testimony to a neuralgic subject on which arguments proliferate and passions run high.

The two-month period following the release of the motu proprio gave proof that the traditionalist movement was no fringe phenomenon, but something that had gained significant strength and sympathy during the relatively peaceful years from 2007 to 2021 (the “Pax Benedictina” to which the book’s title refers). The purpose of this volume is to gather in one convenient place some of the finest and most appreciated essays and articles published in the period from mid-July through September of this fateful year, 2021—not only from America and England (although these predominate), but also from other nations: France, Germany, Switzerland, the Netherlands, Italy, Spain, Argentina, Poland, Kazakhstan, and China.

This book is not, and makes no pretense of being, a presentation of “both sides of the argument.” It offers a variety of critiques of this profoundly unwise and unpastoral decree, which suffers from incoherent doctrinal foundations, grave moral and juridical defects, and impossible ecclesiological implications.

(Angelico Press is profoundly grateful for the many prominent authors the world over who have permitted us to publish their contributions here. We wish to underline that the inclusion of any contribution does not imply the author’s approval of the opinions of others published in the book, or of the editorial decisions made by Angelico Press, including the title, which remain the responsibility of Angelico Press alone.)

PETER A. KWASNIEWSKI (B. A. in Liberal Arts, Thomas Aquinas College; M. A. and Ph.D. in Philosophy, Catholic University of America) is a former professor of theology, philosophy, music, and art history, a composer of sacred choral music, and an author and speaker on topics concerning Catholic Tradition. He has written or edited fourteen books, including most recently The Ecstasy of Love in the Thought of Thomas Aquinas (Emmaus Academic, 2021) and Are Canonizations Infallible? (Arouca, 2021).

This War is the Passion by Caryll Houselander

The Epic Bible: God’s Story from Eden to Eternity