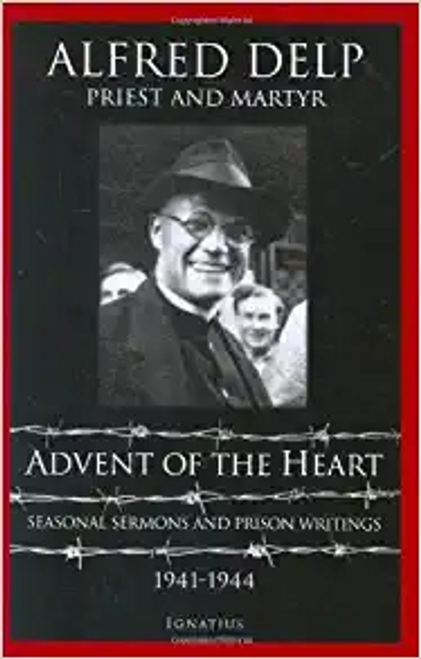 Fr. Alfred Delp,S.J., was a heroic German Jesuit priest who was imprisoned and martyred by the Nazis in a Nazi death camp in 1945. At the time of his arrest, he was the Rector of St. Georg Church in Munich, and had a reputation for being a gripping, dynamic preacher, and one who was an outspoken critic of the Nazi regime. He was an important figure in the Resistance movement against Nazism.

Accused of conspiring against the Nazi government, he was arrested in 1944, tortured, imprisoned, and executed on Feb 2, 1945. While in prison, Fr. Delp was able to write a few meditations found in this book, which also includes his powerful reflections from prison during the Advent season about the profound spiritual meaning and lessons of Advent, as well as his sermons he gave on the season of Advent at his parish in Munich. These meditations were smuggled out of Berlin and read by friends and parishioners of St. Georg in Munich.

His approach to Advent, the season that prepares us for Christmas, is what Fr. Delp called an Advent of the heart. More than just preparing us for Christmas, it is a spiritual program, a way of life. He proclaimed that our personal, social and historical circumstances, even suffering, offer us entry into the true Advent, our personal journey toward a meeting and dialogue with God. Indeed, his own life, and great sufferings, illustrated the true Advent he preached and wrote about.

From his very prison cell he presented a timeless spiritual message, and in an extreme situation, his deep faith gave him the courage to draw closer to God, and to witness to the truth even at the cost of his own life. These meditations will challenge and inspire all Christians to embark upon that same spiritual journey toward union with God, a journey that will transform our lives.

Sermon in a Sentence: A Treasury of Quotations on the Spiritual Life by Archbishop Fulton J. Sheen

Sermon in a Sentence: A Treasury of Quotations on the Spiritual Life by St. Padre Pio of Pietrelcina

The Sermons of St. Alphonsus Liguori: For All the Sundays of the Year

Kolbe: Saint of the Immaculata

The Sources of Catholic Dogma

Mama! Why Did You Kill Us?