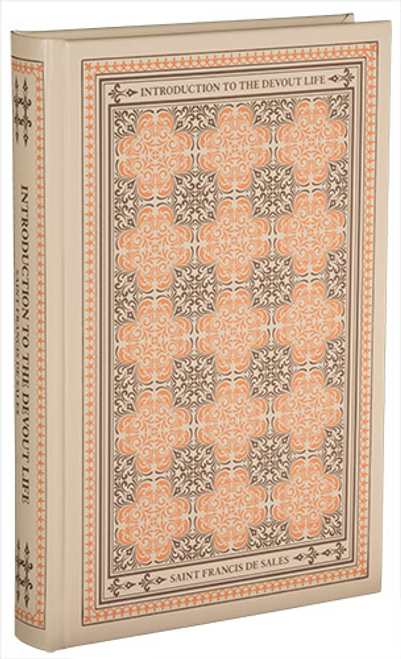 Since its first publication in 1609 this book has never gone out of print. It has always occupied a privileged position in the Church: no guide ever written provides so complete, so balanced and so practical an approach to the spiritual life. Written for the layman surrounded by worldliness, this is a masterpiece of mystical and devotional literature, by a great and much loved Doctor of the Church. This book does what many similar books fail to do, teach the reader to grow in holiness, step by simple step.

St. Francis de Sales was a master psychologist, with a special gift for teaching practical morality. His writings are characterized by sublime common sense. Even non-Christians have admired his prose. Above all, he is a spiritual genius, and thus was made a Doctor of the Church. This book is truly medicine for the soul.

Introduction to the Devout Life by Saint Francis De Sales, edited and translated by Allan Ross. This edition has been re-typeset using the text of the 1943 edition originally published by Burns Oates and Washbourne, London, under the imprimatur of Edm. Canon Surmont, Vicar General, Westminster, 20th November 1924.
Material: Leather Hardback
Preface

This wonderful book has always occupied a privileged position: perhaps no guide ever written provides so complete, so balanced and so practical an approach to the spiritual life. Written for the layman surrounded by worldliness, this masterpiece by a great and much loved Doctor of the Church really does what so many similar books fail to do: it teaches the reader – step by simple step – how to grow in holiness.

St. Francis de Sales was born into an old aristocratic family at Thorens, in the Duchy of Savoy, 21 August, 1567. He received a splendid education at the hands of the Jesuits and seemed destined for a distinguished political career. Francis, however, chose to pursue his vocation in the ecclesiastical life, which led to friction with his father. The future saint emerged victorious from this struggle when he was appointed Provost of the Chapter of Geneva by the Bishop of Geneva – whose seat since the Reformation had been at Annecy – in 1593.

St. Francis' success in Geneva was to become the stuff of legend: he dramatically refuted Geneva's handpicked Calvinist apologists in public debate, reconciled multitudes of Protestants to Catholicism, and very nearly converted Theodore Beza, who was known as the "Patriarch of the Reformation." He was also much loved by the populace for his gentleness, wisdom, humility and love of the poor.

In his period as coadjutor to the Bishop of Geneva (1599-1602), he was obliged to spend much time in Paris and formed friendships with Bérulle, and with Henry IV, who valued him so much that he did what he could to keep St. Francis in France. One of the things the king particularly appreciated, and experienced, was the saint's genius at helping men and women living "in the world" to cultivate the spiritual life and to grow in holiness. In 1602, he was consecrated Bishop of Geneva. St. Francis was often to be in France in the following twenty years, being much in demand as a great preacher, and founding, with St. Jane Frances de Chantal, the Institute of the Visitation of the Blessed Virgin for young girls and widows who felt called to the religious life but were unable to join any of the great orders. Nevertheless, he resolutely refused to accept the prestigious French appointments he was offered, choosing rather to return to Annecy. St. Francis de Sales died at Lyons, 28 December, 1622.

In An Introduction to the Devout Life, St. Francis addresses "Philothea" – the soul living in the world – introducing her to the paths of devotion, by which he means a true and solid piety. These paths are for everyone, not merely priests and religious. The saint goes on to insist that "it is an error, it is even a heresy", to hold that piety is incompatible with any state of life. The first part of the book is devoted to helping the soul to free itself from all inclination to, or affection for, sin. In the second part, he teaches the soul how to be united to God by prayer and the sacraments. The third is concerned with developing the practice of virtue. The fourth is devoted to strengthening the soul against temptation. Finally, in the fifth part, the spiritual doctor teaches the soul how to form its resolutions and to persevere.

The Catholic Encyclopaedia has the following to say about the characteristics of St. Francis' thought:

There are two elements in the spiritual life: first, a struggle against our lower nature; secondly, union of our wills with God, in other words, penance and love. St. Francis de Sales looks chiefly to love. Not that he neglects penance, which is absolutely necessary, but he wishes it to be practised from a motive of love. He requires mortification of the senses, but he relies first on mortification of the mind, the will, and the heart. This interior mortification he requires to be unceasing and always accompanied by love. The end to be realized is a life of loving, simple, generous, and constant fidelity to the will of God, which is nothing else than our present duty. The model proposed is Christ, whom we must ever keep before our eyes. "You will study His countenance, and perform your actions as He did" (Introduction to the Devout Life, 2nd part, ch. i). The practical means of arriving at this perfection are: remembrance of the presence of God, filial prayer, a right intention in all our actions, and frequent recourse to God by pious and confiding ejaculations and interior aspirations.

As the reader will discover, St. Francis was a master psychologist, with a special gift for teaching practical morality; his writings are characterized by the sublime common sense so dear to Chesterton. He is also the most delightful of companions: the beauty and elegance of his style, the felicity of his illustrations – so often derived from nature, and revealing the eye of a lover of God's creation – have made him a classic of French prose even for secularists. Above all, he is a spiritual genius – after all, it was not for nothing that St. Francis de Sales was made a Doctor of the Church: this book is medicine for the soul.

An Introduction to the Devout Life

Rosary Prayers: How To Pray The Rosary, Pocket Size

Saints Are Not Sad: Short Biographies of Joyful Saints by Frank J. Sheed