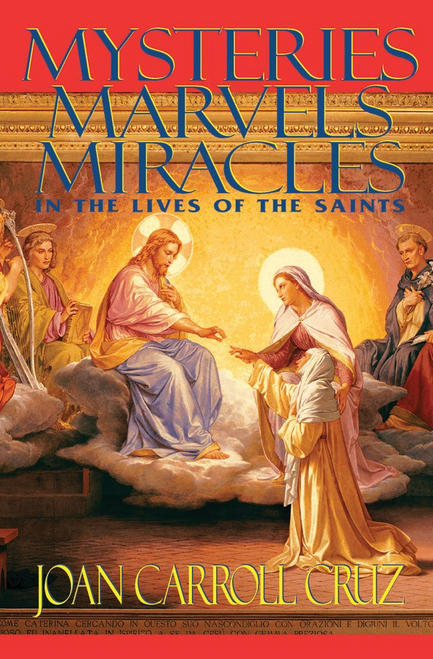 Mysteries, Marvels, Miracles is one of the most amazing Catholic books of the past century, for here in one volume are hundreds of true stories of miraculous phenomena in the lives of the Saints. Easy to read, this book is referenced and indexed, making it a real treasury of miracles.

The author, a now-famous writer, scoured through libraries and wrote to shrines all over the world for the material for this remarkable book. The wonders described here include bilocation, levitation, odor of sanctity, odor of sin, transverberation and other maracles of the heart, miraculous transport, money mysteriously provided, multiplication of food, mystical marriage and heavenly jewelry, miraculous protection, lights and rays of love, fire and heart of love, prophecy, invisibility, Saints who knew the date of their death, the stigmata (wounds of Christ), gift of tongues, mystical fasts, mystical knowledge, incorruption of bodies after death, bodies transformed after death, voices of the dead, death warnings and other signals from the dead, "manna" and perfume from the bodies of the Saints after death, and miracles of the Saints involving earth, sea, sky, rain, snow, ice, plants, fruit and flowers, birds, bees, bugs, animals, reptiles, springs, wells, holy water and fire.

Mysteries, Marvels and Miracles is a tremendous contribution to Catholic literature and a wonderful asset to the Catholic world. Miracles are one the marks of Christ's true Church, and here the reader sees a vast panorama of Catholic miracles reaching back for centuries.

No one can read Mysteries, Marvels, Miracles without seeing that God has indeed favored the Saints with amazing gifts and marvelous powers over nature -- testifying to His own almighty power and to the truth of the Catholic Church.

Joan Carroll Cruz was a native of New Orleans and was the educational product of the School Sisters of Notre Dame. She attended grade school, high school and college under their tutelage. Mrs. Cruz was a tertiary in the Discalced Carmelite Secular Order (Third Order) since 1968; for eight years she served as Mistress of Formation (Novice Mistress).

For her non-fiction books, Joan Carroll Cruz depended heavily on information received from foreign shrines, churches, convents and monasteries. Her books include The Incorruptibles, published in 1977; Desires of Thy Heart, a strongly Catholic-themed novel, also in 1977; Relics, published in 1983; Eucharistic Miracles in 1987; Secular Saints in 1989; Prayers and Heavenly Promises in 1990; Miraculous Images of Our Lady in 1993; Miraculous Images of Our Lord in 1995; Mysteries, Marvels, Miracles: In the Lives of the Saints in 1997; Angels & Devils in 1999; and Saints for the Sick in 2010.

Lives of the Saints: For Every Day In The Year by Fr. Alban Butler

Illustrated Lives of the Saints by Fr. Michael Sullivan, Hardcover

Little Pictorial Lives of the Saints

Purgatory: Explained by the Lives and Legends of the Saints

Rosary Prayers: How To Pray The Rosary, Pocket Size

Praying With Mother Angelica: Medications on the Rosary, the Way of the Cross, and Other Prayers

Prophetic Messages For Our Times

Encounters with Angels: The Invisible Companions of Our Spiritual Life