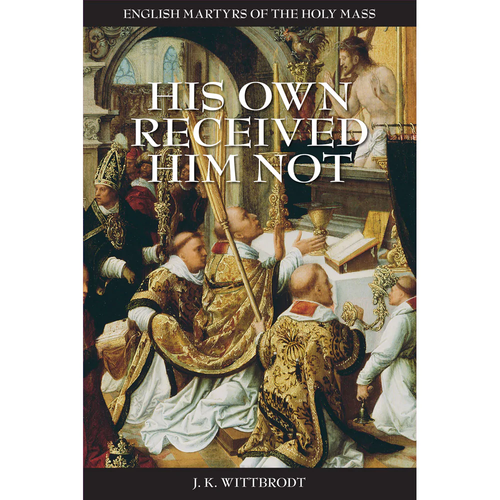 “Studying the history of the English Reformation can help us to see how a handful of people—educated, well-positioned and imbued with revolutionary ideology—can force unwanted and destructive changes onto a peaceful nation by using their political power, propaganda, agitation and stirring up riotous mobs of big cities. It happened numerous times during the history of mankind. It always brought about huge economic losses and the murder of a large number of innocent citizens of the society in which the turmoil was instigated by the revolutionary activists.” - J.K. Wittbrodt, Author’s Note

“This book is about those who gave their life for the Holy Sacrifice of the Mass, saints who were outlawed, mocked and hated by the ruling elite of their times. Their great conflict was played out in prison, in torture chambers and on the scaffold. They gained victory by witnessing to the Catholic dogma of the Mass as a bloodless sacrifice and Christ’s Real Presence in the Eucharist. Most of them were priests, fugitive in their homeland, who were caught by the pursuivants while saying Mass. Others were lay men and women attending the banned Catholic worship or hiding hunted priests. Some of them were bishops who first fell into schism with Henry VIII due to their cowardice but redeemed themselves during the reign of Edward VI and Elizabeth I by standing up for Catholic dogmas, especially for the Holy Sacrifice of the Mass. May the example of these saintly English heroes increase our devotion to the Holy Sacrifice of the Altar in our troubled times plagued by disbelief in the sacrificial nature of the Mass and irreverence towards the Blessed Eucharist.”
-J.K. Wittbrodt, Author’s Note
This stunning book is a fascinating and essential read for all Catholics of today. Much is to be learned from these heroes who not only kept the Faith but spread it in spite of an anti-catholic government who sought their destruction at all times and at every turn. A must-have for every catholic library.

An Exorcist Tells His Story by Fr. Gabriele Amorth

Finding Frassati and Following His Path to Holiness

Kidnapped in Iraq: A Christian Humanitarian Tells His Story

They Have Uncrowned Him

St. Patrick: His Confession and Other Works

Alessandro Serenelli A Story of Forgiveness

THE ROSARY: SPIRITUAL SWORD OF OUR LADY DVD

The Good, the Messy, and the Beautiful: The Joys and Struggles of Real Married Life