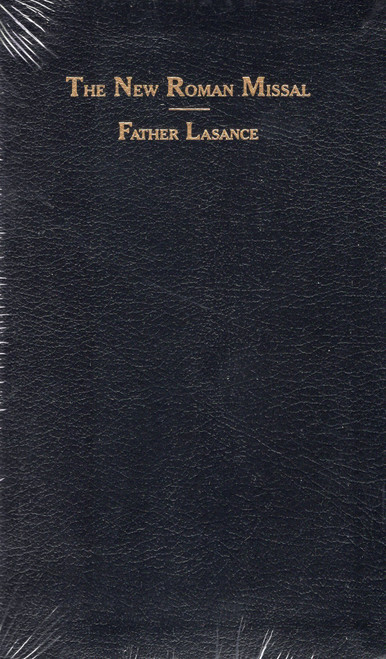 For Sundays, Principal Feasts and Many Other Days

Here is a hard to find daily Missal for the faithful, which will accompany you throughout the Liturgical Year, stressing the important Feasts and Highlights of our Redemption. The Mass propers (including Epistle and Gospel) are printed both in Latin and English. The Missal type has two colors, black for most texts and red for Holy Mass explanations, making it much more practical and convenient for daily use.

To which is added a Supplement comprising an Explanation of “The Ecclesiastical Year and the Sacred Liturgy;” “Short Accounts of Certain Feasts and Brief Lives of the Saints” contained in this Missal, a “Glossary of Liturgical Terms,” with a “Description of the Symbolic Representations” and a Collection of “Communion and Other Prayers” those indulgenced in accordance with the new Raccolta.

The Publishers have also included various additions that will enrich the spiritual life of the religious or lay people, including:

This is a beautiful reproduction of the original 1945 text of the immortal Latin Tridentine Mass, according to the Council of Trent, with complete Latin and English text for the Ordinary and Prospers of the Mass. There are no revisions, but additions made according to the Papal decrees dating from 1945 to the end of Pope Pius XII’s reign include the Mass Propers and the Divine Praise of the Assumption. The binding is sewn with black leatherette covers and gold lettering. The pages have rounded corners and golden edges. Complete with 6 colored ribbon dividers.

Society and Sanity by Frank Sheed

An Introduction to the Devout Life

Divine Mercy Print "Jesus, I Trust in You."