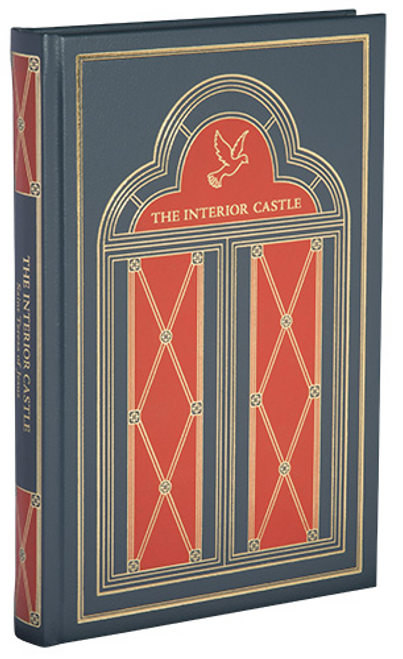 St. Teresa of Jesus, also known as St. Teresa of Avila, is one of the most popular Doctors of the Church. Her teaching on prayer has continued to inspire and guide Christians in their spiritual journeys for over four hundred years.

In The Interior Castle St. Teresa describes the road by which she was led, well aware that the others may be led in a different way. In the heavenly Father’s house, there are many mansions; not only seven, and many paths lead to them. What gives the work such high value is, that it is the result of a most searching inquiry into the various phases whereby a soul is gradually transformed into the likeness of God Himself. Here St. Teresa is at her best. She takes nothing for granted, her own personal experiences are admitted only after having been fully investigated and found to be consistent one with the other, and conformable to the teaching of the Church and the words of Holy Scripture.

The Interior Castle or the Mansions - Translated from the Autography of Saint Teresa by the Benedictines of Stanbrook. Revised with Introduction and additional notes by the Very Reverend Benedict Zimmerman, O.C.D. This edition has been re-typeset using the text of the 1912 edition originally published by Thomas Baker, London, with an Imprimatur by Edm. Canon Surmont, Vicar General, Westminster, 22nd January 1912.
Material: Leather Hardback
Preface
I began to think of the soul as a castle made of a single diamond […] in which there are many rooms, just as in Heaven there are many mansions.

[God] showed her a most beautiful crystal globe, made in the shape of a castle, and containing seven mansions, in the seventh and innermost of which was the King of Glory, in the greatest splendour, illumining and beautifying them all. The nearer one got to the centre, the stronger was the light; outside the palace limits everything was foul, dark and infested with toads, vipers and other venomous creatures.

The message of St Teresa’s work is essentially so simple—describing the journey through the sets of rooms within a castle—that it can sometimes be easy to miss the fact that it is deeply profound. Teresa herself acts as our guide on the journey through five sets of chambers, or mansions as they are called in this translation, within a Castle until, in the fifth chamber, the soul finds itself united to God. Here St Teresa exclaims:

Oh, sisters! How shall I ever be able to tell you of the riches and the treasures and the delights which are to be found in the fifth Mansions? I think it would be better if I were to say nothing of the Mansions I have not yet treated, for no one can describe them, the understanding is unable to comprehend them and no comparisons will avail to explain them, for earthly things are quite insufficient for this purpose.

This echoes St Paul, where he says that no human eye has seen nor ear heard what God has in store for those who love Him. Any earthly metaphor would be quite insufficient to describe what one encounters when the soul is united with God. Never-the-less she tries to give her readers (who were originally her spiritual daughters in the Carmalite convents she had founded) some understanding of what this is like, although always aware of the weakness and the limitation of her own descriptions.

Yet the fifth set of mansions is not the end of the spiritual path, and having already described spiritual union as occurring in the fifth mansions Teresa guides us onwards through to the seventh set of mansions, describing an ever deepening of love and experience of Our Lord Jesus Christ. It is here, in the seventh sets of rooms, that the spiritual marriage occurs between the soul and Jesus. The spiritual union of the fifth mansion is figured as a betroval which only finds its consummation in the seventh mansion. Drawing on her own spiritual experiences, Teresa describes (in terms strongly reminiscant of the Book of the Apocalypse) how “He who is joined to God becomes one spirit with Him”.

Paradoxically although it is the soul that undertakes the journey, so it is also the soul that is journied through. The chambers are the chambers of the soul. As Teresa says upon entering the first mansion, or chamber, of the Castle:

I seem rather to be talking nonsense, for, if this castle is the soul, there can clearly be no question of our entering it. For we ourselves are the castle: and it would be absurd to tell someone to enter a room when he was in it already! But you must understand that there are many ways of “being” in a place. Many souls remain in the outer court of the castle, which is the place occupied by the guards; they are not interested in entering it, and have no idea what there is in that wonderful place, or who dwells in it, or even how many rooms it has. You will have read certain books on prayer which advise the soul to enter within itself: and that is exactly what this means.

Indeed, prayer is the key to progressing through the Mansions. St Teresa calls Christians to pray if they wish to know God more deeply. The call to pray has constantly been on the lips of the Church down through the centuries, whether on the lips of Popes, Bishops, Pastors, Monks, Sisters, Visionaries, or devout laypeople. Time and time again a simple message has been set before Christians. If you would grow in your Faith, if you would mature in Christ, if you would grow strong in the Lord you must pray. There is no alternative, there is no short cut.

Yet for the Christian it is a journey that we are supported on, one that is saturated with the grace of God equipping us and aiding us on our path. We journey through the mansions to meet Jesus who dwells in the heart of those who believe in Him, but at the same time he equips us for our pilgrimage:

For just as a great stream of water could never fall on us without having an origin somewhere, as I have said, just so it becomes evident that there is someone in the interior of the soul who sends forth these arrows and thus gives life to this life, and that there is a sun whence this great light proceeds, which is transmitted to the faculties in the interior part of the soul. The soul, as I have said, neither moves from that centre nor loses its peace, for He Who gave His peace to the Apostles when they were all together can give peace to the soul.

This idea of the ever present grace of God in the process of growing towards him is also beautifully illustrated in the metaphor of the silkworm which is used in her description of the fifth mansions. The mature silk worm starts to spin its silk and to build the house in which it is to die. This silken house is a symbol of Christ, for our life is hidden in Christ, and moreover if he die in Him, then we also find life in Him.

Yet the idea of synergy is also present—the idea that God gives us the grace to enable us to be co-workers with Him in our journey of salvation. For the silken house is, in some ways, spun by us, by our prayers. Yet since in prayer we are united to God it is still the work of God.

On, then, my daughters! Let us hasten to perform this task and spin this cocoon. Let us renounce our self-love and self-will, and our attachment to earthly things. Let us practise penance, prayer, mortification, obedience, and all the other good works that you know of. Let us do what we have been taught; and we have been instructed about what our duty is. Let the silkworm die - let it die, as in fact it does when it has completed the work which it was created to do. Then we shall see God and shall ourselves be as completely hidden in His greatness as is this little worm in its cocoon.

When the silkworm enters this state of prayer, and becomes quite dead to the world, it is transformed into a pure white butterfly. However, our transformation is utterly unmerited by us. It has been provided by God’s grace, yet we have worked with God to bring about this transformation. We have opened ourself to co-operate in His plan, and without our willing consent He would never have brought about this grace in our souls.

So Teresa invites us to enter prayer, and enter into self abandonment for God. She reminds us that “although, like Saint Peter, we may have left only our nets, yet He esteems a person who gives all that he has as one who gives in fullest measure”. Our own deepest desires will be met by entering into prayer and progressing through the mansions. Perhaps crawling like a lowly worm at first, but ultimately destined to be transformed through the love of God into buterflies: creatures whose hearts are perfectly united with their creator’s.