Theology for Beginners By Frank Sheed 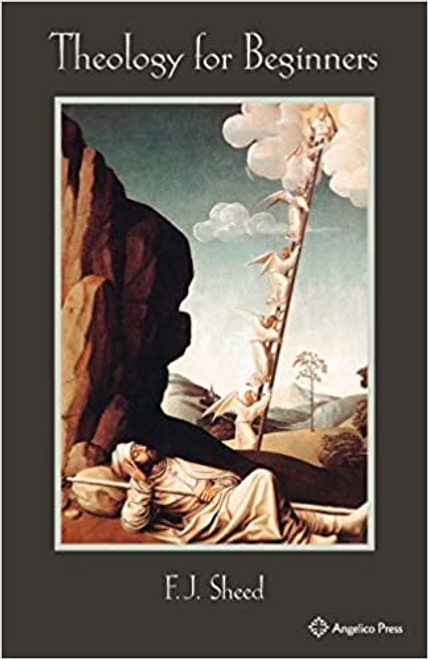 Theology for Beginners By Frank Sheed

The acclaimed Catholic writer and apologist Frank Sheed presents one of the most clear and outstanding explanations of the central doctrines of the Christian faith ever written. He starts with a compelling case of good reasons for anyone to study theology, and the wonderful rewards that accompany such a pursuit.
After explaining how God is Spirit, Sheed examines God's infinity and man's creation from nothing. He then covers in depth such key doctrines as the Trinity, the Fall, the Incarnation and Redemption, the Mystical Body, Grace and the Sacraments, and the Last Things. For those to whom these doctrines seem formidable, Sheed brings a fresh approach with lucid and carefully reasoned prose. His beautiful insights and clear explanations will help stir our minds to the inspiring truth of the spiritual realities at the center of human existence.
Paperback. 197 pages.
Reviews:
"Frank Sheed never composed an incoherent sentence. He proved so capable an apologist because he was such a clear writer. Through his crystalline words the reader sees the Catholic Faith as a whole and as something not just true but desirable. I return to Sheed again and again. I might think of one or two who were his equal in apologetics. I can think of no one who was his superior."
— Karl Keating, Author, Catholicism and Fundamentalism
"Preaching on the streets of London is a school all it's own — the hammer and anvil that forged Frank Sheed&'s ability to explain the Catholic Faith even to the most unsophisticated listener, even in the context of verbal conflict and debate. Sheed has done what very few can—bring the lofty mysteries of God down to the simplest of ears. A must read for those who think theology is boring or over their heads. Sheed will surprise you!"
— Steve Ray, Author, Crossing the Tiber
×

Society and Sanity by Frank Sheed

Theology And Sanity By Frank Sheed

Theology And Sanity By Frank Sheed

The Kingship of Christ According to the Principles of St. Thomas Aquinas